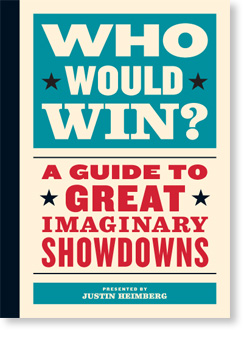 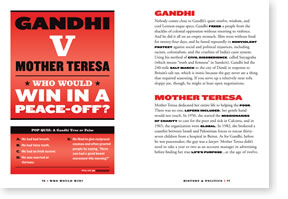 A Guide to Great Imaginary Showdowns

This book starts with a simple but irresistible premise: In a fictional showdown between A and B, who would kick whose ass?

Read Who Would Win? to find out who would be the victor in each dramatic match, based on a litany of arguments you'll enjoy debating. More than 75 pairs of competitors are pitted against each other in every possible arena, high and low: from politics to paparazzi, authors to action heroes, science to science fiction. Cultural commentator Justin Heimberg argues both sides with conviction and humor--point by point and play by play--providing delightfully opinionated, entertaining commentary and trivia along the way.

Territory: World Rights sold: US, FR Published in the US by Barnes & Noble