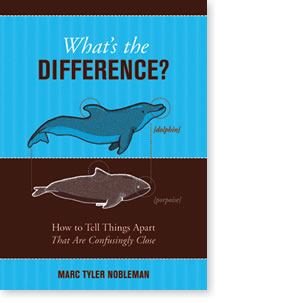 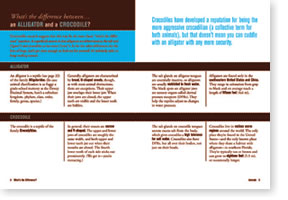 How to Tell Things Apart That Are Confusingly Close

Alligator and crocodile; partly cloudy and partly sunny; Daniel Boone and Davey Crockett: could you explain the differences between each of these things? Haven't you ever wondered? In the tradition of Schott's Original Miscellany comes What's the Difference?, a treasure trove for trivia lovers packed with facts, explanations, and specifics that illustrate the differences between things that are confusingly close.

Now when confronted by a confusing choice, you can find out which is what and why by consulting this fact-crammed compendium, which cleverly organizes puzzling terms in separate columns for easy, point-by-point comparison. Author Marc Tyler Nobleman has sniffed out the details that differentiate one thing from another, and explains them in a concise, clear, and entertaining style.

Marc Tyler Nobleman is a writer and cartoonist whose work has appeared in more than 100 publications including the Wall Street Journal, Barron's, Forbes, Good Housekeeping, and the New York Daily News. He is the author of more than 50 books, including How to Do a Belly Flop, and co-author of Boys of Steel: The Creators of Superman. Marc is also a dedicated fact compiler.

Territory: World Rights sold: JP, KR, US Published in the US by Barnes & Noble