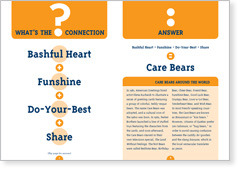 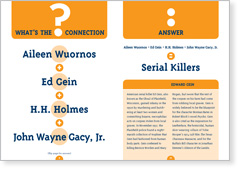 Affenpinscher, malamute, schipperke, and puli? They're all dog breeds, specifically rat terriers. Anglerfish, Brolga cranes, wolves, and termites? They all mate for life. Pinatubo, PelÃ©e, Etna, Kilauea? Active volcanoes. Blanco, resposado, anejo, mixto? Grades of tequila. From science and literature to pop culture, politics, and the arts, this book illuminates the connections--sometimes trivial but always enjoyable--among at first seemingly unrelated things. Along the way, you'll pick up conversational tidbits and fun factamazoids sure to inform and amuse.

Jake Oliver is a playwright, performer, and freelance writer. Originally from Boston, Jake lives with his wife and children in Leonardo, NJ.

Read Who Would Win? to find out who would be the victor in each dramatic match, based on a litany of arguments you'll enjoy debating. More than 75 pairs of competitors are pitted against each other in every possible arena, high and low: from politics to paparazzi, authors to action heroes, science to science fiction. Cultural commentator Justin Heimberg argues both sides with conviction and humor--point by point and play by play--providing delightfully opinionated, entertaining commentary and trivia along the way.

Territory: World Rights sold: FR, US Published in the US by Barnes & Noble