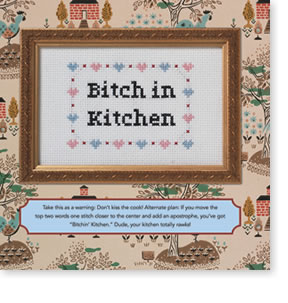 33 Designs for Your Surly Side

Sugar and spice and everything #&%@! That's what Subversive Cross Stitch is made of. In this wicked little book, Julie Jackson, the creator of subversivecrossstitch.com, reinvents the age-old craft of cross stitch. Inside you'll find her most popular patterns along with all-new equally snarky designs. Stitch up "Bitch in Kitchen" for a sassy housewarming gift. Spread cheer with the ever-festive "Bite Me." Or whip up "This Place Sucks" for a cherished co-worker. Jackson outlines the simple tools and techniques you'll need to get started, and gives modern stitchers the chance to say what's really on their minds.

Julie Jackson was not cut out for the rat race. Stuck in a stifling workplace with an idiot boss, she discovered the sassy side of traditional needlework and began selling cross stitch kits online. Within a year, her kits began selling in retail outlets such as Urban Outfitters and Target.com's Red Hot Shop. She lives in Dallas, Texas, with her charming husband. Visit her online at www.subversivecrossstitch.com.

Each project is presented in a full-color photograph accompanied by step-by-step instructions and how-to photographs. Also included are ideas for creating your own wallpaper designs; tips and techniques for foolproof application; and resources for finding cool papers.

Derek Fagerstrom is a San Francisco-based editor/curator/ designer, and former Project Editor at ReadyMade magazine. Lauren Smith worked for the designer Todd Oldham in his New York studio, where she managed his PR department and helped produce photo shoots, television segments, magazine articles, and events. Lauren and Derek are the co-founders of The Curiosity Guild, an arts-and-crafts collective that offers workshops, field trips, appreciation nights, and special events. Check out their website and store, www.curiosityshoppeonline.com.

Tina Barseghian is the Editor-in-Chief of CRAFT magazine. She has written for the San Francisco Chronicle, Design for Living, and CondÃ© Nast Traveler and was a contributing editor at ReadyMade magazine.