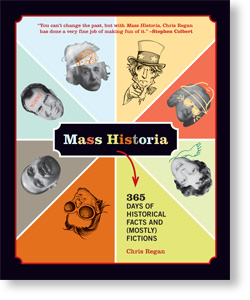 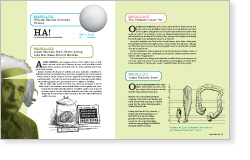 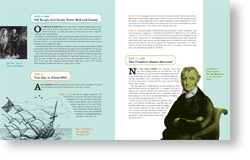 The History Channel meets Comedy Central in this irreverent, entertaining, and abundantly clever look at a year's worth of "facts" by Chris Regan, a five-time Emmy award-winning comedy writer and one of the co-authors of Jon Stewart's bestselling America (The Book). Flipping through the historical calendar, Regan offers up unknown, unrepentant, and often-unbelievable facts for every day of the year, based on genuine, historical occurrences. Mass Historia rewrites history with Regan's unique brand of satirical commentary, and includes: o historical photos o hilarious photo captions o fun fact lists History may never recover--and certainly will never be the same. And if we're destined to repeat it, at least we'll have fun along the way.

Chris Regan is an acclaimed comedy writer who wrote for The Daily Show with Jon Stewart for seven seasons. His work has appeared in USA Today, New York Magazine, and on numerous websites. Click on this link to check out the author's Mass Historia website: www.masshistoria.net. Kathryn Rathke, based in Seattle, illustrates for clients throughout the U.S. and Europe. Highlights include the opening and closing credits for Paramount Pictures' Charlotte's Web, the poster for Todd Solondz's film, "Palindromes", and her numerous portraits for the German Newspaper, "Welt am Sonntag." To see Kathryn's work, visit her website: www.kathrynrathke.com.

Territory: All rights with publisher Published by Andrews McMeel Universal