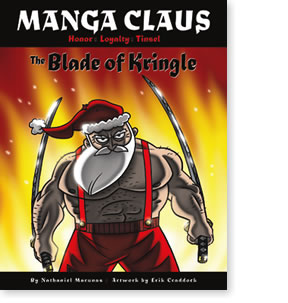 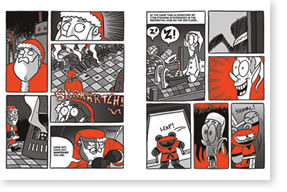 The Blade of Kringle

'Twas several nights before Christmas, when all through Santa's Workshop, a gang of deranged ninja teddy bears was stirring--stirring up trouble, that is... In Manga Claus: The Blade of Kringle, a disgruntled employee, dark elven magic, and a horde of cursed toys threaten to put an end to Christmas. The only things standing between the destruction of the workshop and the happiness of millions of kids around the world are Santa and his ancient samurai swords, imbued with the spirit of the season. His blades are keen and his bujitsu unmatched, but will they be enough?

Nathaniel Marunas grew up in New York City when the subways were covered in art and video-game culture was on the rise. Today, Nathaniel is grateful to be employed as a book editor in Gotham.

Erik Craddock grew up in Babylon, NY, and graduated from New York's School of Visual Arts. He is an illustrator, animator, and storyboard artist; this is his first book.

Jeffrey Rutzky is a well-known paper folder and the author of two books in the Tear-i-gami series, Jewelgami and Bugagami, and Kirigami, a kit.

Dr. Philippa Gordon is a long-time Brooklyn pediatrician with three children of her own.