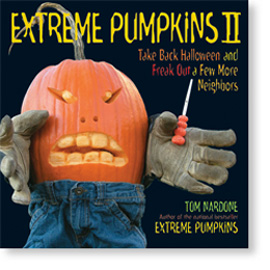 Take Back Halloween and Freak Out a Few More Neighbors

After grossing out his many fans with Extreme Pumpkins, best-selling author and renegade pumpkin-carver Tom Nardone is back--with a vengeance. In this diabolical follow-up to his phenomenally successful debut, he presents 20 all-new designs guaranteed to thrill trick-or-treaters and horrify respectable neighbors everywhere. Get ready for:

A disgusting photo is provided for each project, plus full instructions for creating these and other freakish designs. Also included are suggestions for Tom's signature pranks and practical jokes. With Extreme Pumpkins II, you too can become a neighborhood legend. Tom Nardone is the founder of ExtremePumpkins.com, an alternative pumpkincarving website with a large and largely deranged following. His first book, Extreme Pumpkins, was a national bestseller that landed him on Live with Regis & Kelly (click on this link to watch the video on YouTube), Good Morning America Weekend (click on this link to watch the video YouTube), and MTV's TRL (they are still removing the pumpkin pulp from their studios). He lives in the suburbs of Detroit with his wife and three kids where he runs an Internet company.

Marc Zingarelli is an illustrator whose work has appeared in the New Yorker, Details, Entertainment Weekly, Parenting, Men's Fitness, and many other books and publications.