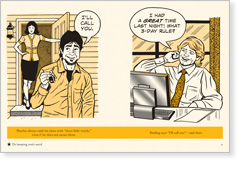 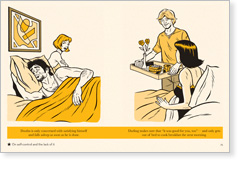 Doofus and Darling’s Manners for the Modern Man

Do you ever long for the simple moral rules of childhood? When your favorite children's magazine laid out the principles of good and bad behavior so clearly? In any situation, you could learn from the responsible, considerate boy, while disdaining that other, more reprehensible fellow, whose selfish behavior, though occasionally tempting, obviously would not earn anyone's approval. What a relief it was knowing right from wrong! But now, faced with the decidedly more complicated ethical situations of modern adult life, how do you know what to do? Turn to Doofus and Darling's Manners for the Modern Man for the answers. Here, simply laid out and clearly illustrated, are the kinds of choices you have to make every day--only Doofus and Darling have made them already, and the consequences of their behavior are here for you to learn from.

THIS BOOK IS A PARODY.

David Hoffman is the author of Kid Stuff: Great Toys From Our Childhood and The Breakfast Cereal Gourmet. He minds his manners in Los Angeles. Faith Salie is a monthly contributor to O, the Oprah Magazine as an "ethics expert," is the host of Sundance Channel's coverage of the Sundance Film Festival, and was the host and executive producer of the NPR show Fair Game from PRI with Faith Salie.

Marc Zingarelli is an illustrator whose work has appeared in the New Yorker, Details, Entertainment Weekly, Parenting, Men's Fitness, and many other books and publications.